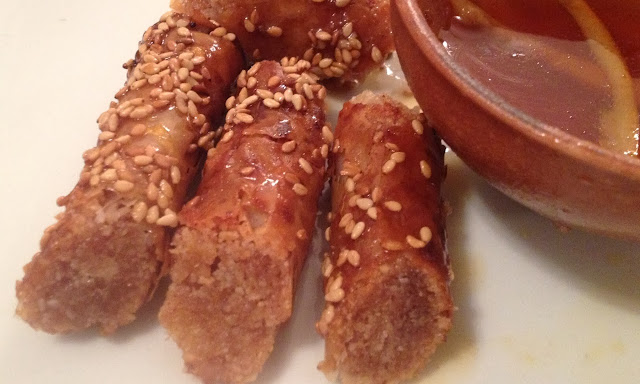 Hanukkah + Pie Week = fried Jewish desserts. In my family, that would probably mean filled donuts, but I'm digging further back to my mother's Moroccan roots. And where I land is my aunt Clotilde's Moroccan 'cigars' - where the 'crust' is filo, and the filling is sweet almonds and cinnamon.

If they'd been 20 years younger, my mother and her five North African Jewish sisters could have hosted a very entertaining reality cooking show. They were/are charismatic, a little outrageous, and rock stars in the kitchen - but Mom used to say Clotilde was the best cook of all. She had high cheekbones and a slight gap between her front teeth which I shared, a wry wit and an easy laugh - and made amazing desserts.

I remember visiting her in Paris with my then-new husband on Rosh Hashanah. The table was set with a colorful mezze of small salads and a large roast - a typical Sephardic Jewish holiday meal. While helping in the kitchen I noticed little plates of desserts, particularly two things: a platter of pretzel-like fried dough and thin fried rolls drenched in honey and orange peel. I never asked her about it because the combination didn't appeal to me. But later, I had often wondered what they were. Tata Clotilde teased me about not trying her desserts (which, luckily, my husband devoured.)

On the other hand, my mother adored all things sweetened and orange. Jars of both Bon Maman and Smucker's orange marmalade could be found somewhere in her fridge for slathering on bread with untempered hunks of butter with afternoon tea or coffee.

It's only now that I see this orange love as a throwback to the orange-based desserts that were probably ubiquitous along the Mediterranean coast of North Africa; my mother remembers orange groves in her native Algeria, and would reminisce about a confection her Spanish-Moroccan mother Miriam would make for Jewish holidays called "cigars". I now had a name for the mystery dessert.

Moroccon almond cigars are ground almonds and cinnamon rolled in filo like a cigar, then fried and dredged in honey and sesame seeds. If you fry it a tad too long, the ends get a little dark and it looks like a stubbed out stogie. 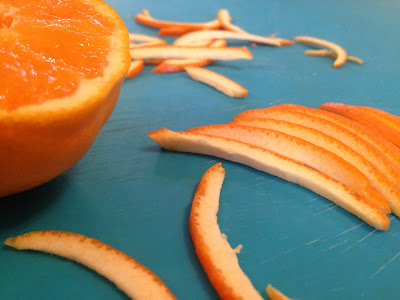 Suddenly, I am in love with the orange honey combo - and the whole cigar experience. The crunch of fried filo is echoed subtly by the almonds, and set off by the mellow honey and bright citrus. Wow. Rockets of happiness go off in my head! It's delicate and dense at the same time - so much going on. I'm happy to report that they got rave reviews from the husband and son who will find some packed in his lunch today. The tradition lives on.

With Hanukkah a few days away, this fried pie (who says they have to be round?) would be perfect for Day 6 of Pie Week. They keep well at room temperature for several days. You can also freeze them before frying, and defrost the day of. I'm making them in memory of my dear Tata Clotilde, whose birthday just passed, and who always made me laugh while we cooked. 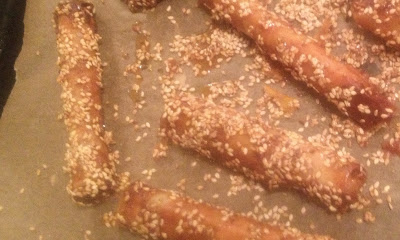 Most of the sweet Moroccan cigar recipes out there are baked and follow the baklavah method of buttering the filo. But nothing short of frying will do for Hanukkah, when the whole symbolic point is to use oil. And besides, frying tastes oh-so much better.

I found a recipe in a book called Authentic Recipes from Morocco, by Fatema Hal, which you can see here. The author doesn't provide a syrup. The orange honey reduction I describe is based on my memory of Tata Clotilde's.

Orange reduction: Combine all ingredients and just barely simmer for at least an hour, longer if possible. The honey mixture shouldn't actually bubble but steam slightly and move around a bit, as though settling into the heat.

To assemble: Cut pastry sheets in 5" x 7" rectangles. I did this one sheet at a time with a pizza cutter to keep the remaining parchment from drying out (barely successfully.) Roll 3 teaspoons of almond paste into a cigar that's a little shorter than the parchment, about 6". If the mix is too crumbly add a little water or melted butter. With the long edge of the filo facing you, place the almond paste roll lengthwise, about 1 inch from the edge. Fold side edges in (using egg if needed to keep folds in place) and roll up like a cigar. Seal with beaten egg.

To fry: Heat oil over medium-high in a large saute pan; make sure there's at least 1/2 inch of oil in the pan. Test the oil with a candy thermometer (375 degrees) or by tossing a little filo in; if it cooks without burning too quickly you' re ready to add the cigars. Fry the cigars until golden - no more than 2 minutes each side - and drain on paper towels. If it takes longer than 2 minutes to color, turn up the heat slowly because you don't want to quick fry, not soak the cigars in oil. Roll each fried pastry in a dish of warm honey, then roll in toasted sesame seeds. Repeat with other cigars.

You are outdoing yourself with every new pie! such a talented pastry chef and storyteller!

Thank you - I'm learning along the way. Wishing you many happy pies this season! 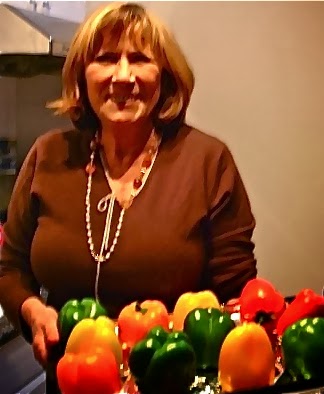